The scenario chosen for the experiment was in keeping with eco trends in the funeral industry. Bodies are buried without the invasive process of embalming, without the excessive materials that go into the construction of a coffin, and in a grave that is shallow enough to encourage aerobic decomposition, instead of the slower anaerobic breakdown that occurs in graves the traditional depth of ‘six feet under’.

As human cadavers were not available for the experiment, 21 pig carcasses were used as alternatives.

The pigs came directly from the human consumption chain**. A preference was made for pigs that were underweight, sick, or with hernias, which made them less desirable for human food.

*WARNING: Some of the images may be upsetting for some people. Discretion is advised. 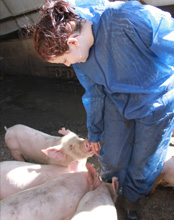 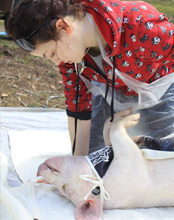 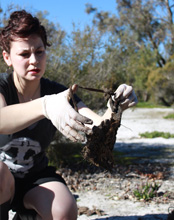 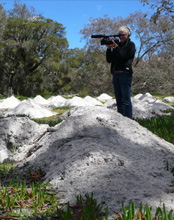 **The project has ethics approval and has received praise from the chair of the UWA ethics committee as demonstrating care and respect in the use of animals.