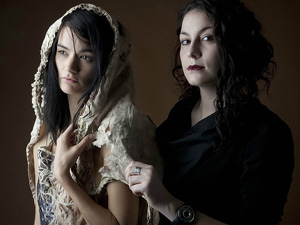 Pia Interlandi is a fashion designer whose work often incorporates death as a scientific and psychological concept. She has a particular interest in textile manipulation and garment transformation, informed by her fascination with human biology and time spent in Japan under the instruction of Yoshiki Hishinuma. As an undergraduate in RMIT’s Bachelor of Design in Fashion, she began dissecting garments ‘autopsy-style’ and experimenting with dissolvable fabrics as a method of exploring life’s transient qualities. This became the basis of her current PhD study at Melbourne’s RMIT University, entitled [A]Dressing Death: Fashioning Garments for the Grave . However it was when her grandfather died in 2008 and she dressed him for his funeral that her work began to move away from metaphor and began to engage in the realities of death. At this point she also trained to become a certified funeral celebrant.

Part of her research ‘The Pig Project‘ has involved an in depth residency at Perth’s SymbioticA, where she researched the effects of clothing and textiles on decomposition with a specialist forensics team. Involving rigorous immersion in the rituals associated with preparing the body for interment, garments from this investigation have been on exhibit at the London Science Museum and London Print Studio. This doctoral study has evolved into the design of funerary garments and even the dressing of the deceased, which is now where much of Pia’s practice is now located.

In 2012 she started her current practice, Garments for the Grave, where she now designs custom made bio-degradable burial garments with client family participation. This practice has been highly praised both nationally and internationally and in March she featured in the ABC’s Artscape: Anatomy documentary, ‘Soul’, directed by Larin Sullivan, which screened Australia wide. At the end of 2012 she was invited to UK to work with Clandon Wood Surrey Hills Natural Burial Reserve where she is fine tuning her skills before hoping to return to Australia to open her own bespoke funeral practice and Natural Burial Ground in the future.

Pia is a passionate advocate for Natural Burial and has done a number of lectures on the topic while also teaching Textile Technology and a number of experimental studio classes within the School of Architecture and Design at RMIT since 2007.