Pia’s doctoral research* consists of 3 major projects, ‘Dissolvable Garments’, ‘Body Moulds’ and ‘The Pig Project’ which have all come together to inform ‘Garments for the Grave’. 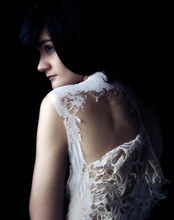 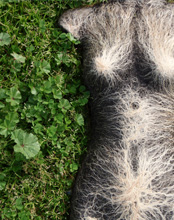 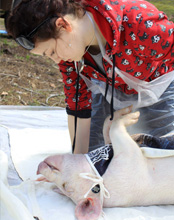 Garments for the Grave 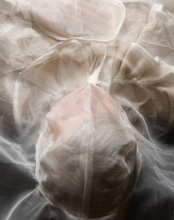 “Fashion designers largely cater to living bodies. While there has been an increasing use of death related imagery within the fashion field, most notably in the area of advertising and digital media, this is vastly different from approaching the actuality of ‘the dead.’ While the dead body may be absent of life, it becomes part of a series of cultural, material, emotional, and ethical processes that have been largely neglected by fashion design. Generally, the dead body is approached by dressing and wrapping to cover and shield it (and the living) from its vulnerable, transient state. A key aim of the research has been to seek alternative ways to dress the dead body – both through the design of actual purpose-built garments, and in the way the act of dressing the body with these garments can affect our approach to death and the dead body.

The research has been undertaken through a series of creative projects involving fashioned processes and garments. Projects have been produced and have evolved in response to the moments between death and disintegration in three primary ways. Firstly, through the design of garments that literally dissolve as a way to explore the disintegration of the garment as an aesthetic process. Secondly, it is examined through exploring processes of growth and formation in the earth, where plant roots are grown in body moulds. The third body of work explores the realities of decomposition, engaging directly with the visceral nature of ‘disgust,’ through the dressing, burial and exhumation of pig bodies, done in the context of a scientific experiment.

Ultimately, this research becomes the beginning of a new type of fashion practice, catering to the care and dressing of the dead. It makes contributions to ways in which we might deal with dead bodies, and to thinking about the potential role of fashion design as the fashioning of processes, rather than simply the design of garments.”

*This research is being examined in June 2013.